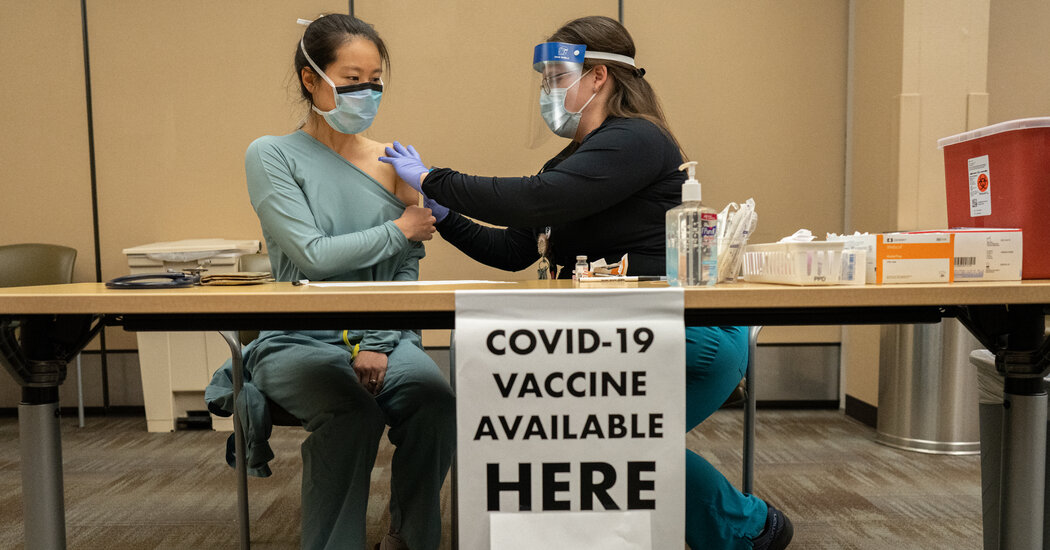 WASHINGTON — The Food and Drug Administration on Friday authorized booster shots of both the Pfizer-BioNTech and Moderna vaccines for everyone 18 and older, opening up eligibility to tens of millions more fully vaccinated adults.

The move simplifies eligibility, fulfills a pledge by President Biden to offer the shots to every American adult and formally allows a practice already in place in at least 10 states. Fearful that waning protection and the onset of winter will set off a wave of breakthrough infections, a growing number of governors had already offered boosters to everyone 18 and older ahead of the holidays.

The agency said the expansion was justified by currently available clinical trial data as well as real-world evidence. In a statement, Dr. Peter Marks, who leads the F.D.A. division that regulates vaccines, added: “Streamlining the eligibility criteria and making booster doses available to all individuals 18 years of age and older will also help to eliminate confusion about who may receive a booster dose and ensure booster doses are available to all who may need one.”

Dr. Anthony S. Fauci, the federal government’s top infectious disease expert, has argued relentlessly over the past month for booster shots for all adults, a position shared by most of Mr. Biden’s other health advisers. Public health experts who argue that healthy younger adults do not need them, he has said, are ignoring the risks of symptomatic Covid-19.

“Enough is enough. Let’s get moving on here,” he said at an event Wednesday night. “We know what the data are.”

If the Centers for Disease Control and Prevention agrees, all adults who received a second shot of either Pfizer or Moderna at least six months ago will most likely be able to get a booster shot by the weekend. The agency’s outside advisers are meeting to discuss the issue at noon Friday and will hear from Pfizer, Moderna and C.D.C. staff. A vote is scheduled for 2:45 p.m.

At a White House briefing on Wednesday, Dr. Rochelle Walensky, the C.D.C. director, promised that the agency would “quickly review the safety and effectiveness data and make recommendations as soon as we hear from F.D.A.”

The F.D.A.’s action came after months of fierce debate within the administration and the scientific community about who needed booster shots, and when. As large studies showed protection from all three federally authorized vaccines holding strongly, some outside advisers to the F.D.A. and C.D.C. repeatedly expressed discomfort with how quickly the administration was moving to offer the shots.

While the F.D.A. has been evaluating booster data for months, it granted the companies’ requests with remarkable speed. Pfizer-BioNTech filed its request roughly 10 days ago, and Moderna announced Wednesday that it had applied but did not say when.

The agency said that it did not convene its independent vaccine advisory committee because the panel had already had discussed the use of booster shots extensively and “the requests do not raise questions that would benefit from additional discussion.” The panel’s recommendations are nonbinding.

For Moderna, regulators said, the data showed that 149 clinical trial participants who received a booster dose had higher antibody levels compared with 1,055 study volunteers who received only two doses. They said Pfizer’s data for 200 participants in a clinical trial showed the booster shot raised antibody levels compared to one month after a second shot.

Critics have said the administration’s booster campaign was motivated by practical or political reasons more than scientific ones. Some said that federal regulators were analyzing safety and efficacy data on the fly. Others have worried that moving to clear Pfizer and Moderna booster doses for all adults might inadvertently undermine the vaccines and suggest that two doses are not strongly protective.

“The evidence isn’t there that a large rollout of boosters is really going to have that much impact on the epidemic,” said Ira M. Longini Jr., a vaccine expert and professor of biostatistics at the University of Florida. He said that booster doses could increase protection at least temporarily and might help a jittery public feel as if they have another tool in the pandemic, but would do little to halt transmission of the virus, which is being driven by the unvaccinated.

Other public health experts have argued that data from Israel, which rolled out an aggressive booster campaign over the summer, suggests boosters can cut transmission rates; they say the extra shots are needed both to counteract waning protection and to limit confusion.

Complex eligibility rules coupled with the government’s recent decision to let people choose among all three vaccines for their booster have also left the public somewhat befuddled, proponents of the F.D.A.’s decision on Friday say.

“This decision by F.D.A. is overdue,” said Dr. Elizabeth McNally, director of the Center for Genetic Medicine at Northwestern University’s Feinberg School of Medicine.

“Many people had trouble understanding whether they should or shouldn’t get boosters,” she said in a statement. “This message is much clearer — get a booster!”

There is near universal agreement among federal officials, state health leaders and outside scientists that persuading the tens of millions of Americans who have yet to get even their first shot should remain the top priority in trying to curb the pandemic.

More than 182 million adults in the United States, or 71 percent, are fully vaccinated. So far, more than 32 million of them have gotten an additional shot.

Until now, those eligible for boosters included people 65 and older, residents of long-term care facilities, people with underlying medical conditions, and those whose jobs or institutional living conditions heightened their risk.

All recipients of Johnson & Johnson’s one-shot vaccine have already been cleared to get a booster shot at least two months after their injection.

Jason L. Schwartz, an associate professor of health policy at the Yale School of Public Health, said the latest move was “a recognition that the current approach to booster recommendations just isn’t working.”

“It’s so confusing that I think the public has sort of shrugged at the importance of boosters,” he said. “And the groups for whom it’s really important to get boosters — the older individuals, the long-term care residents, folks with medical conditions — aren’t getting boosters at the rates they should. It’s time for a reset.”

The booster rollout is expanding even as public health experts continue to argue over whether young, healthy adults need added protection. The argument is stronger for recipients of Pfizer’s vaccine than for recipients of Moderna’s, whose protection has proved more durable.

While some studies have found that the Pfizer vaccine’s effectiveness against infection and hospitalization drops about four months after the second dose, Moderna’s effectiveness has remained steadier.

At the same time, regulators have been concerned by data from Nordic countries and elsewhere suggesting that young male Moderna recipients may face heightened risks of myocarditis, or inflammation of the heart muscle — a side effect that has also been tied to the Pfizer vaccine. The F.D.A. on Friday updated the vaccine’s fact sheets to note that some studies have suggested there may be an increased risk in men under 40 “relative to other authorized or approved mRNA Covid-19 vaccines.”

Regulators said that although data was limited, evidenced suggested a lower risk of myocarditis after booster doses than after second doses of the shot. Concerns about myocarditis are behind the F.D.A.’s decision to wait to authorize the Moderna vaccine for adolescents.

Scientists have said the absolute risk still remains very small, most cases are mild and resolve quickly and that Covid-19 can also trigger myocarditis.

The F.D.A. said on Friday that in reviewing broader booster eligibility for Moderna’s and Pfizer’s vaccines, it had examined recent virus cases and real-world data on the risks of myocarditis and concluded that the benefits of a booster shot outweighed the risks. The F.D.A. also noted that both companies were conducting additional studies on myocarditis risk.

At the heart of the booster debate is the question of what vaccines are supposed to do. Critics of the administration’s policy argue that despite some degree of waning protection, the vaccines are still fulfilling their mission of protecting against severe disease and hospitalization.

Booster advocates like Dr. Fauci counter that the vaccines should also protect against symptomatic disease, especially since some patients avoid hospitalization but suffer long-term consequences.

“I don’t know of any other vaccine that we only worry about keeping people out of the hospitals,” Dr. Fauci said at a White House briefing Wednesday. “I think an important thing is to prevent people from getting symptomatic disease,” including younger people.

A host of other countries have taken the same approach, including Australia, Brazil, Canada, Germany, Hungary, Israel, Japan, Norway and Saudi Arabia. Regulators for the European Union have authorized booster doses of both Moderna and Pfizer-BioNTech for all adults.

What Is This COVAX Program That The U.S. Is Pouring Millions Of Vaccines Into?